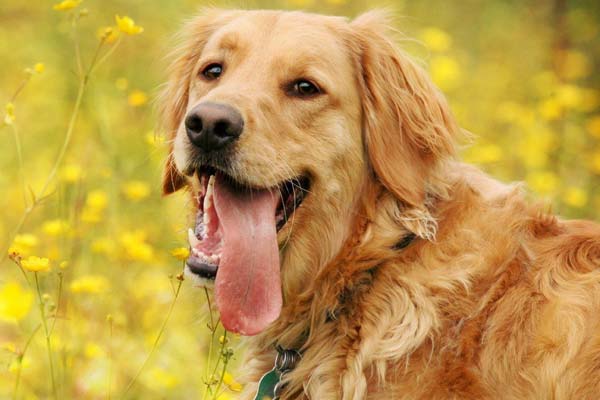 Golden retrievers are beautiful, active dogs. Before they can become active, though, they need to grow their adult coats.

The first sign of this adult coat starting to come in is when gold retrievers get their feathers. Knowing when your dog is going to get their feathers may help give you a timeline for when you’re they’re ready for sportier activities.

What Are a Golden Retriever’s Feathers – and When Do They Come In?

Feathers on a dog? Well, it’s actually just a specific kind of fur. When we talk about feathers on a golden retriever, we’re referencing patches of fur that can be found around the stomach, tail, and legs of the dog. As a golden retriever grows, the coat on these areas begins to transition into a long, feathered fur. Thus, they get their feathers.

Feathered fur has a very specific purpose on a golden retriever. Unlike the topcoat of fur, which is extremely thick and water-resistant, feathers are soft and light. This coat is used to regulate body temperature in the dog, thinning significantly during warmer months and thickening up in the cold.

Feathers are a sign of growth in your dog. This kind of fur is the first bit of the “full coat” transition as your pet goes from puppy to full-grown dog. The first place that feathers are likely to appear noticeably is behind the hind legs. Check out reference pictures if you’re not sure about your puppy’s coat yet.

When Do Feathers Come In?

The adult coat initially starts growing at around three months of age. The initial growth is very subtle, so you probably will not be able to tell for a while. Watch your puppy’s coat from around this time closely, though, so that you can have an idea of how the growth process is coming along.

You should expect your golden retriever to reach full-growth at around two years old. This is the time when their adult coats should be entirely set.

As said previously, feathers are usually the first part of the golden retriever’s final coat to come in. So, naturally, these are going to show up a little earlier than the rest of the full coat.

Most owners say that they notice feathers coming in at around eight months. This is only a small amount, so it might not be entirely noticeable yet. To really be able to notice feathers, you may need to wait about a year.

After that, you will definitely notice your pup getting an increased amount of feathering, especially behind the legs and on the tail.

Can You Speed Up Coat Transition?

There are actually ways to make the transition from puppy coat to full-grown coat go faster for your pup. Grooming is the way to go if you want to get the process moving.

First, you’re going to want to get your puppy used to sit through a good brushing, though. Starting your puppy off with a grooming brush may end up scaring them away from brushing altogether.

So, if you’re starting young, you will want to train them by using a soft-bristled brush first. This isn’t going to do much as far as grooming is concerned. But it will help get them used to the sensation of brushing so that they can start being properly groomed earlier.

Once your puppy is used to being brushed, you can move on to a pin brush. Pin brushing your dog is going to do a couple of good things. Pin brushing helps remove loose hair more than a soft-bristle brush could.

Removing this loose hair promotes the growth of new hair, which is going to speed up the transition. Pin brushes can also help bring more circulation to your dog’s skin. Increased blood flow in areas with hair increases hair production, which is what you want.

Something important to note when talking about golden retrievers is the differences that come with each individual dog. Each dogs’ timelines are going to vary from the next. A way to get ahead of this, though, is by talking to the puppy’s breeder.

If you got your golden retriever from a breeder, they are likely to have information on the parents. Asking questions about the parents, like if they got their adult coats later or earlier, can help gauge how long it might take for your pup.

Not all golden retriever owners get their dogs from breeders, though. If you don’t have that information, going by the estimation is still good!

Honestly, the breeding information is great for those who really want to know in advance, but it’s probably not going to differ too much from the estimate.

What’s important is that you can be excited to spend even more time with your dog, doing plenty of outdoor activities!

Golden retrievers are one of the most popular dogs in the world. They are sporty animals, with the capacity for activities in most climates. This ability can mostly be contributed to their very adaptive coats.

The coat on golden retriever changes throughout its life. As puppies, they have soft, fluffy coats. But, as they get older, their coats transition. Instead of soft, they become coarse and water-resistant.

This helps keep them warm and (mostly) dry in snowy or rainy environments. This is done through a seasonal shedding process, in which the dog will shed more in summer and less in winter.

If you have a golden retriever puppy, you will be excited to watch for the start of the transition into this coat. There are a few different stages to look at, though every dog is going to have its own unique timeline for growth.

Golden retrievers can be the most fun dogs that any active owner could as for. When fully grown, their coats are weather resistant and can help your dog stay warm or cold, dependent on the climate.

If you want to know when you will be able to start doing these activities with your pup, you’re going to need to watch their coat.

As soon as you see them coming in, you’ll have a good idea of how long it may take before you can bring your pup exploring!