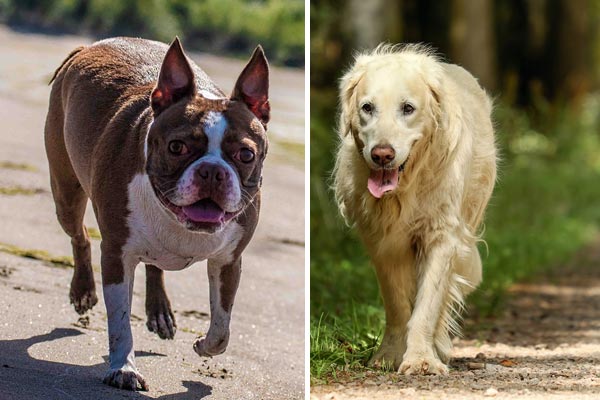 Not only are dogs the world’s most popular pets, but certain purebred dog breeds are more popular than others.

When it comes to the Boston Terrier and the Golden Retriever, we are talking about two of the most popular and prized dog breeds in the world!

So what would it be like if these two breeds were crossbred? Is it even possible to breed a Boston Terrier Golden Retriever pup?

It sure is! Read on to meet this precious and prestigious pup that is becoming more popular every day.

The Boston Terrier Golden Retriever is one of a growing number of new so-called designer dog breeds or hybrid dog breeds.

These dogs are sometimes also nicknamed the Boston Retriever or Golden Terrier.

Crossing these two breeds can potentially bring health and longevity benefits to both. But there are also some unknowns you need to watch out for, which we will discuss in-depth in later sections here.

At first glance, you may not think mixing a Golden Retriever and a Boston Terrier could possibly work. These two breeds just seem so different!

But as this YouTube video showcases, there are some wonderful similarities on the inside in terms of these two breeds’ temperaments.

Read on to learn a lot more about what a Boston Terrier Golden Retriever dog might be like to have as a companion canine.

What Is Designer Dog Breeding

The words we use to describe dog breeding can really influence how people feel about different breeding practices.

Designer dog breeding, hybrid dog breeding, crossbreeding – these are the terms often used to describe the breeding practice that is used to create a new purebred dog breed.

Many people believe that crossbreeding is not a good practice. But in actuality, it is the way that nearly all of today’s modern purebred dog breeds were created!

As Gardner Animal Care Center explains, this is because the American Kennel Club and similar purebred-only dog registries will only accept dogs they have approved as purebred. It can be a long process to get a new breed approved!

The takeaway here is that there is nothing inherently wrong with crossbreeding two different purebred dog breeds. In some cases, increasing genetic diversity, it can actually make the hybrid puppies stronger and healthier.

As Embrace Pet Insurance explains, there is a difference between a “mutt” or mixed-breed dog and a hybrid or designer dog breed.

For example, let’s say you adopt a rescue dog that looks like it might have some Golden Retriever and Boston Terrier genes.

But then you order a canine genetic test and discover that your Boston Terrier Golden Retriever actually has DNA from five different dog breeds (genetic tests are a great way to really find out which breeds are in your mutt’s lineage!).

This is quite different from choosing a Boston Terrier Golden Retriever from a designated hybrid dog breeder who carefully chooses each parent dog, pre-screens each for all known genetic health issues, and only then permits the mating.

In this case, your Boston Terrier Golden Retriever puppy will have parent dogs who have purebred papers certifying them as such. You will know all about their health, temperament, and breeder background.

There is nothing at all wrong with adopting a mixed breed dog of unknown parentage and not all dog owners care about pedigree.

But if you do – or you just love the look and personality of a true Golden Retriever Boston Terrier puppy – then it can be helpful to know the difference. This way, you make sure you get the puppy you really want!

What Generation of Boston Terrier Golden Retriever Should You Choose

There is something else you need to know before you pick out your Boston Terrier Golden Retriever puppy.

Breeding Business explains that these designations refer to how genetically close the puppies are to the parent dogs.

So let’s do a brief overview of each term so you have an idea of how it can affect the puppy you select. The parent generation – Boston Terrier x Golden Retriever – is called the P Generation or Purebred Generation.

The next generation is F1, followed by F1b, F2, and so forth.

An F1 Boston Terrier x Golden Retriever litter will show the most genetic variance in every way.

But how those two genetic halves will combine in a given puppy is completely up for grabs!

This means you could get a big surprise when your tiny puppy suddenly packs on the pounds and ends up standing waist-high.

Conversely, you might be planning for a medium to large Boston Retriever only to wait and wait while your puppy barely gets any bigger.

This is very common with F1 hybrid puppy litters. Some dog owners like the surprises and others do not. If you are in the latter category, keep reading for other options.

An F1b hybrid puppy will have one purebred dog parent and one hybrid dog parent.

This means that whichever parent dog is the purebred dog will have genes the predominate, meaning puppies will be influenced more by that parent dog than the hybrid parent dog.

Here is where you will start seeing a bit more uniformity within litters as the puppies grow up – but only a little!

The F1b generation is really the generation where the breeder is evaluating each puppy and beginning to identify the most desirable traits to breed for in future litters.

The F2 generation is where you start to see a lot more uniformity in terms of puppy size, height, weight, coat type, color, and temperament.

If you have specific requirements for your puppy, you want to look for an F2 generation or later breeder.

An F2b litter of puppies will have one F1 parent dog and one F1b parent dog. Here again, you will start to see even more uniformity between the puppies in each litter in many of the important variables.

For example, if coat type is very important to you, it will be easier for the F2b breeder to predict which coat type each puppy will inherit than it would be for an F1 breeder.

F3 generation puppies will have two F2 parent dogs. The F3 generation is where a hybrid dog will start to resemble a new potential purebred dog breed in its own right.

You see more uniformity in every major variable covered by a purebred dog breed standard. The puppies grow up to look and act very much like one another. It is easy for a puppy owner to plan ahead.

As you can probably tell, after F3 comes F3b and then F4 and F4b and so on and so forth. There may be additional generational back-crossing depending on which traits the breeder is aiming to highlight.

The best way to select your hybrid dog breeder is to find out what generation(s) the breeder works with and explain your requirements clearly. The breeder can then tell you if they are likely to produce a puppy that will match your needs and goals.

What Does a Boston Terrier Golden Retriever Mix Dog Look Like

Now that you have a better understanding of the basic structure of most hybrid dog breeding programs, you can understand why there is no one simple answer to this question.

A Boston Terrier Golden Retriever mix dog will look different depending on the litter generation and the breeder’s selection of parent dogs.

Here, rather than trying to identify a single set of criteria for appearance, we can look at each purebred parent dog and generate a range of variables you can look for.

According to the American Kennel Club (AKC), the Boston Terrier typically weighs between 12 and 25 pounds and stands about 15 to 17 inches tall (paw pads to shoulder tops).

These dogs are neat and compact and surprisingly sturdy for their small size. They always have white markings with either plain black, plain seal, or a mix of seal or black with brindle and white.

Their fur is short and neat but double-layer, which means plenty of seasonal and year-round shedding as the coat changes with the seasons to help regulate body temperature.

The most important appearance trait to know for the Boston Terrier is that these dogs have a short, flat muzzle shape known as brachycephalic.

A brachycephalic muzzle shape can create some respiratory, dental, and gastrointestinal health issues that are important to watch for.

The American Kennel Club (AKC) states that the purebred Golden Retriever tends to vary in size based on gender.

The Golden Retriever has a double layer coat with a thick insulating inner layer and a longer wavy outer layer. This dog sheds noticeably all year long and when the seasons change the undercoat will shed out heavily – an event known as a “coat blow.”

The Golden Retriever gets their breed name from the golden color of the coat. The exact shade of golden can vary, however.

From this overview, you can get an idea of how much early generation hybrid puppies could potentially vary in size, height, weight, and appearance!

The other very important research you will want to do before choosing your puppy is about health and longevity.

For the Boston Terrier, patellar luxation, eye issues, and congenital deafness are the three major genetic health concerns to watch for.

In addition, BOAS (Brachycephalic Obstructive Airway Syndrome) is a major concern in the breed line.

For the Golden Retriever, the major issues to watch for are hip and elbow dysplasia, cardiac and eye issues.

In addition, canine cancer is a major health issue that affects the breed line.

With this information, you know to ask your hybrid dog breeder to show you pre-breeding health tests that reflect each parent dog has been tested and cleared of all known heritable health issues.

This boosts your chances of bringing home a genetically sound and healthy puppy with the best chance of enjoying a long life with you.

Now you can talk confidently with dog breeders to choose a Boston Terrier Golden Retriever mix puppy who meets all your criteria and fits your needs.