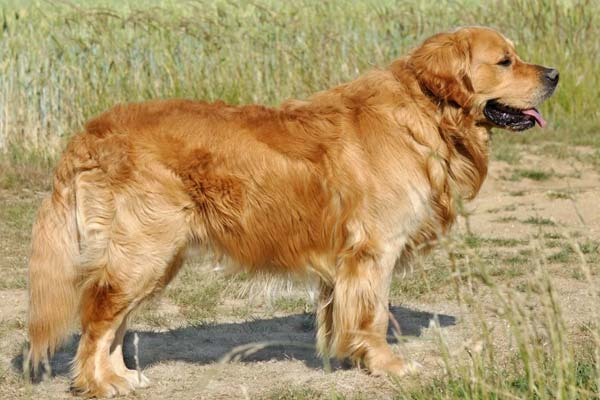 Few breeds work their way as deeply into the hearts of families more than golden retrievers. Families and goldens just go together, with love aplenty all around. Some might say this breed embodies absolute perfection.

The saying, “It’s all in how they’re trained,” usually refers to dogs with a reputation for aggression, but it applies to golden retrievers as well.

There’s more to it than that, of course, but isolating any one main factor resulting in a dog’s aggressive behavior is an inexact science.

It could be they were raised in an environment where they’re subjected to neglect, abuse, and isolation. Dogs of nearly any breed can become anti-social and snarly in these environments.

While experts disagree on the finer points of which dog breed is the most aggressive, these breeds seem to make everyone’s list. The golden retriever is not on anyone’s bad dog list, by the way.

“Not my dog,” you may say. And you’d be right. Not your dog. But dogs of these breeds have shown the most tendency toward aggression, based on various tests of their temperament. One of the most relied-upon is the Temperament Test, conducted by the American Temperament Test Society.

Their test does not reflect tendencies toward aggression but instead measures dogs’ ability to interact with humans and the environment.

The breeds of the Most Aggressive List are the ones that had the greatest percentage of dogs that failed the test.

Chihuahuas and Chow Chows had a failure rate of around 30 percent.  By contrast, the golden retriever’s failure rate was less than 15 percent.

Temperament is a summation of the dog’s innate and learned traits and talents. These factors are:

How is Temperament Tested?

The test simulates a casual walk in the park or through a neighborhood. Everyday situations are mimicked, and the dog’s reaction to them is measured.

These situations stimulate the dog’s sight, vision, and sense of being. To balance the stimuli, neutral situations are also used to see if the dog can distinguish from non-threatening situations to ones that pose a genuine danger to them.

These reactions result in failing marks:

These are what the dog will encounter during its test:

In this test, a person who is a stranger to the dog approaches the handler, shakes his hand, engages in conversation while totally ignoring the dog. Dogs are observed for actions that would indicate he is protecting the handler.

A stranger approaches abruptly, but with a pleasant tone. The stranger is friendly to the dog and pets him. This tests the dog’s social skills.

The handler leads the dog toward a hidden assistant, who rattles a metal bucket filled with rocks. He sets this bucket in their path.

This tests the dog’s alertness and curiosity. If necessary, the handler may ask the dog to investigate the bucket.

The handler stops at a designated point with his back toward an assistant. The assistant fires a .22 starter pistol three times, with pauses of varying lengths between the shots. This tests the dog’s recovery response to a sudden noise.

The handler approaches an assistant who is sitting in a chair. The assistant is holding a closed umbrella. As the handler and dog approach, he opens the umbrella.

This tests the dog’s recovery response to a startling visual occurrence. The handler may be asked to encourage the dog to investigate the umbrella.

The dog and handler walk on a 15-foot clear plastic sheet. This tests the dog’s reaction to unusual footing.

The dog walks solo on a chain-link fence – or a 12-foot x 3-foot exercise pen. This tests the dog’s reaction to unusual footing and its willingness to walk on something unusual without the assistance of his handler.

The handler and dog stop at a specified point. An oddly-dressed stranger crosses their path in front of them, but not at a close distance. This tests the dog’s alertness to an unusual situation.

The same oddly-dressed stranger approaches a little closer to the dog and his handler and behaves in an aggressive manner. This tests the dog’s protective instincts.

The stranger advances even closer, but never close enough for the dog – restrained by a six-foot leash – to reach him.

This is the only test in which a breed’s reputation is considered when giving a passing or failing grade; grading on the curve, so to speak.

A dog trained for the protection of the handler will be allowed to lunge at the stranger, while a “lap dog” that lunges may receive a failing mark on that particular test.

When a Golden’s Gold Gets Tarnished

So, on the rare occurrence of an aggressive golden retriever, what happened? For “family” dogs, dogs with a history of compatibility with humans, there is no definitive reason for inappropriate aggressive behavior. There are reasons – plural – but one reason does not stand out among the others.

A few of the reasons a golden may become aggressive or exhibit a trend toward aggression are:

Golden retrievers often grieve when “mommy and daddy” go to work or the children go to school.

They can become resentful, especially if they’re denied quality time with their humans even when the family is home. Irregular feeding times and insufficient servings can also lead to resentment.

They teach each other when play gets too rough, but it can take six months before it becomes imprinted.

Training a golden for hunting or for guarding can have its rewards, but done wrong, and you might create a monster.

Physical hits, slaps, and blows that inflict pain don’t teach a dog a lesson; it teaches dogs that humans are mean.

Aggressive behavior, borne from a self-preservation instinct, can be manifest to a person who approaches a dog. The dog doesn’t know that the person approaching means them no harm.

Dogs that live in the country do not encounter humans as often as dogs that live in city neighborhoods. They have their circle of humans – their family – and any stranger who approaches is perceived as being a threat.

The aggression can start as soon as an unrecognized car comes rumbling up the driveway. While a “city” dog sees cars all day long and is able to ignore them, a “country” dog is more alert to an approaching vehicle.