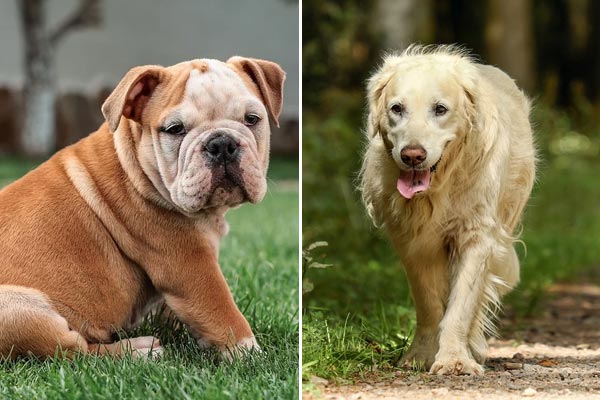 The Golden Retriever is the American Kennel Club‘s fourth most popular dog breed. The Bulldog (English) is just behind the Golden at number five.

So combining these two breeds together can feel like getting the best of the best!

But choosing a hybrid dog breed means you need to do double the research to make sure you are bringing home a healthy puppy or rescue dog.

In this article, we guide you through the steps to decide if the Golden Bulldog is the right companion canine for you!

These dogs are often called Golden Bulldogs or simply Golden Bulls. There is no way to predict how the two-parent dogs’ genes will combine to influence each puppy. This is why it is important to do your research before bringing home a Golden Bull puppy.

Watch a Golden Retriever and Bulldog Training Together

This short YouTube video gives you a good side-by-side view of the Golden Retriever vs Bulldog for overall size, coat type, and body structure.

Now you can imagine how a Golden Retriever Bulldog puppy might look based on which features that puppy inherits from these two different purebred parent dogs!

What Is a Hybrid Dog Breed

As Gardner Animal Care Center explains, modern designer or hybrid dog breeding began in a rather unusual way back in the 1970s.

A blind woman contacted the Australian Guide Dog Association to inquire about receiving a guide dog.

But this woman had a unique problem – her husband was wildly allergic to dogs! She wanted a hypoallergenic dog who could guide her without triggering her husband’s allergies.

As the Australian Labradoodle Association outlines, the breed manager took on the challenge and started a hybrid dog breeding program to try to produce such a dog for this woman.

He succeeded and the new hybrid dog breed was called the Labradoodle. At first, Labradoodles weren’t very popular and no one wanted the other puppies. But then the manager, Wally Conron, decided to advertise them as a new dog breed.

Suddenly he had more eager owners than he had puppies. The Labradoodle launched a whole new era of dog breeding that many today call “designer” or “hybrid” dog breeding.

As this Washington Post article highlights, this wasn’t as popular in the dog breeding world.

However, hybrid dog breeding, or crossing two different purebred dog parents to create a new dog breed, is nothing new. It is one of the ways that many of today’s purebred dog breeds were created!

So you don’t need to worry that you are choosing a hybrid dog breed versus a purebred dog breed. What you do need to focus on is making sure the breeder you get your puppy from has a good reputation and places puppy health before profit.

There are potential health benefits a hybrid puppy can gain from having two different purebred parent dogs.

One reason hybrid dog breeding is more popular today is that this type of breeding program adds back genetic diversity, which in turn can be health-promoting.

But the key to achieving this breeding goal is to choose healthy parent dogs!

Both Golden Retrievers and Bulldogs have certain known health issues that can be passed from parent dogs to puppies.

Your Golden Bulldog breeder should be able to show you health records from each parent dog and demonstrate that breeding pairs have been cleared of all of these health issues.

The Canine Health Information Center (CHIC) keeps records that dog breeders submit on a voluntary basis. These records are your roadmap to identifying the specific purebred health issues that could impact your Golden Bull puppy.

The purebred Golden Retriever can be affected by the following genetic health issues:

The purebred English or American Bulldog can be affected by the following genetic health issues:

Bulldogs – American, English, or French – also suffer from issues related to their short muzzle type. The brachycephalic or flat-faced muzzle shape is a sought-after look in many of today’s purebred dogs and cats.

The pushed-in face creates an adorable infant-like facial appearance that hides concerning health issues. Among the most severe include trouble chewing and swallowing, gastrointestinal issues, respiratory and ocular issues, and BOAS.

Mild cases of BOAS can often be controlled with medication and lifestyle modification. Severe cases often require corrective surgery. A diagnosis of BOAS also typically means the dog will not be able to travel by air.

It is important to understand how purchasing or adopting a dog with BOAS may impact your lifestyle before you make the lifetime commitment to a puppy or rescue dog.

Established purebred dog breed lines tend to consistently produce puppies with a certain appearance and temperament. This is because the genes that produce variations have been mostly weeded out.

The same cannot be said of hybrid dog breeding programs, however. Because these programs are newer, it is not always easy to predict how much influence each purebred dog parent will have over the genetics of a given puppy.

As Breeding Business highlights, in very early hybrid litters (typically called F1 or F1b), this means two puppies from the same litter can potentially look and act quite differently from each other.

For this reason, the best way to guesstimate what to expect is to take a closer look at the personality and temperament of the Golden Retriever and Bulldog parent dogs.

So now let’s take a closer look at what a Golden Bulldog is like to live with! What type of personality will your hybrid pup inherit? Will your Golden Bull be laid-back and easygoing or energetic and high-strung?

Let’s take a look at what genetics say!

The American Kennel Club (AKC) classifies the Golden Retriever as a dog that is friendly, devoted, and intelligent.

The Golden Retriever is part of the sporting group of dog breeds. Bred to work as a hunting companion to humans, these dogs adore being with people. They are famously friendly, good with kids, and even good with other dogs.

Golden Retrievers are often described as being everybody’s best friend. They do not make good guard dogs because they may fail to recognize a threat in their eagerness to greet the intruder!

The American Kennel Club (AKC) classifies the Bulldog as a non-sporting dog breed. These dogs were originally bred for dog fighting, a “sport” that has thankfully since been outlawed.

Bulldogs are described as friendly, calm, and courageous. They do make good (but not great) guard dogs with the proper training.

Bulldogs love people and are good with kids. They tend to get along well with other dogs and are very social and playful.

While this quick overview doesn’t give you the full picture of the potential for genetic variance in temperament and personality, it does tell you one important fact.

Both Golden Retrievers and Bulldogs tend to get along well with people and other dogs. They make average guard dogs at best. They are friendly and happy-go-lucky overall.

So it would be reasonable to expect your Golden Bulldog to have at least some if not all of these same qualities.

Where you will see a lot more variation is in the coat type your Golden Bulldog may potentially inherit.

Here, the variance is easy to see.

The Golden Retriever has a medium to long thick wavy golden coat. The Bulldog, in contrast, has a short, flat, neat coat. Both have a double layer coat, with an insulating inner layer and a wind and water repellant outer layer.

So what coat type will your Golden Bulldog grow up to have? The puppy coat is always a single layer. But once your pup passes the six-month mark, you can expect the puppy coat to start shedding out as the adult coat grows in.

This is when you will find out if your Golden Bulldog has inherited the Golden Retriever parent’s long, lush coat or the Bulldog’s short neat coat.

In either case, however, you can expect a lot of shedding, especially seasonally as the undercoat sheds out in bulk. The Golden Bulldog is definitely going to require a lot of brushing and sweeping during these times to control dead, shed hair.

Another important aspect to consider with any hybrid dog breed is the potential for your puppy to grow up with very different exercise and training needs than what you expect.

But here again, there is one thing both the Golden Retriever and the Bulldog breeds share in common.

In both cases, you will need to wait until your veterinarian confirms that your puppy is done growing before allowing them to do any sustained playing or running.

This is to protect the leg bones and skeletal system from harm. Your veterinarian can X-ray your dog’s growth plates to find out when they have closed. This is when it will be safe to let your little pup run and play more vigorously.

According to the Golden Retriever Rescue of Mid-Florida, adult Golden Retrievers need at least one hour per day of moderate to vigorous exercise and play to stay happy and calm.

Luckily, Goldens scores high in people-pleasing, which is a good temperament to make fast progress in dog training.

As Castlewood Bulldogs kennel points out, Bulldogs need about half the daily exercise that Golden Retrievers do.

And Bulldogs fare better when you break up the exercise into shorter increments. This helps these dogs avoid overheating and respiratory distress associated with their flattened face shape.

Bulldogs can be stubborn and strong-willed. Using positive training methods with reinforcements like praise and treats is the best way to get a Bulldog to go along with training.

This gives you an overview of how much exercise your Golden Bulldog is likely to need as well as a picture of whether training will be easy or more challenging. Of course, the final outcome depends on which parent dog’s genetics shows upmost in your pup!

Last but not least, let’s take a closer look at how big your Golden Bulldog puppy might grow up to be.

The Golden Retriever typically weighs between 55 and 75 pounds and stands 21.5 to 24 inches tall with a slim and lean body (under all that fur).

The Bulldog typically weighs 40 to 55 pounds and stands just 12 to 16 inches tall with a stout, squat body.

So you will need to be prepared for your Golden Bulldog puppy to be either a medium or a large dog breed.