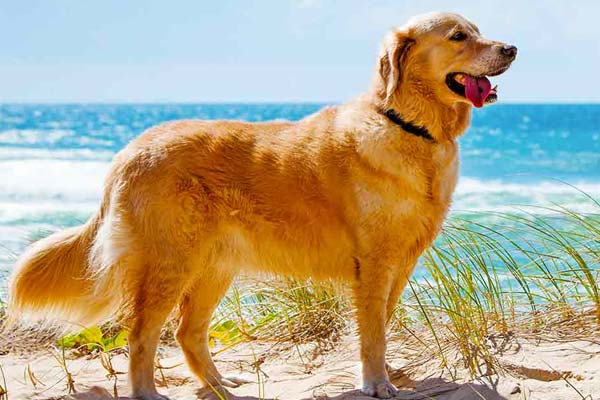 Airline restrictions are changing all the time, especially when traveling with a pet. Typically, large breeds such as the golden retriever, have a more difficult time getting on a plane than smaller dogs. This can make traveling even more stressful and pricey. You aren’t without options though.

How can I fly with a golden retriever? Golden retrievers flying domestic have a lot more options than those flying international. While flying in the cabin is pretty much out of the question, there are still airlines that will allow golden retrievers to fly in cargo. Prices can range anywhere from $100 to upwards of $7,000 depending on where you are flying.

For those that suffer from depression, anxiety or one of the other many mental illnesses, you have the opportunity to fly with your dog in the cabin with you for free; no matter the size.

You must get a referral from a therapist first, and then you can get your furry friend certified as an emotional support animal for around $25.

Can I Take My Golden Retriever on a Plane?

The only way for your golden retriever to fly in the cabin with you is if it is a puppy small enough to fit under the seat in front of you. The puppy must be 2 pounds or 10 weeks old to fly. Otherwise, your retriever will be in the cargo.

Despite all the constantly changing airline regulations, it is still possible to take your golden retriever on a flight with you.

However, it may be a little pricier than you originally hoped. No matter what though, it is going to take some research and quite a bit of planning ahead.

While there are airlines that will still allow larger dog breeds to fly with the cargo (United Airlines being the most popular), there is an increasing number of airlines that are starting to deny pets altogether.

This is because of the number of pets being lost, injured or even dying during the flight. One bad news story and an airline are likely to stop allowing breeds like the golden retriever.

The airlines that do still accept golden retrievers as cargo are also the airlines that have pressurized and climate-controlled cargo areas. Flying in cargo isn’t much different than flying in the cabin.

There are also limits on crate sizes for dogs now. If your dog requires a crate taller than 30 inches, it may have to fly separately as air cargo.

Air cargo will usually have fewer restrictions however, prices will hike up to the thousands and the travel time for your dog is sure to double, at least.

Below is a chart of ticket prices for airlines that allow golden retrievers to fly cargo. It also includes their popularity rating based on customer reviews:

The certification is about $25 dollars and your dog flies for free. All you have to do is call your airline and let them know as soon as possible.

You will have to turn in an ESA letter as well as informing the gate attendant as soon as you arrive at the gate that you have an ESA.

When it comes to flying with your golden retriever there are more factors you may want to consider first:

Whether your dog will be traveling as cargo or in the cabin as an ESA, you will need to give the airline plenty of time. If your golden retriever is a certified ESA, simply call the reservations number associated with your airline.

Let them know you are traveling with an ESA animal, and they will most likely go over the paperwork you need to bring with you.

If your golden retriever is traveling as cargo, you will need to contact the airline’s cargo department. They will let you know how far in advance to check-in your pet.

When it is the day of your departure, make sure you arrive with plenty of time to spare. If your golden retriever is flying cargo, you will have to go to the air freight terminal located in a separate part of the airport.

It is also a good idea to reconfirm with your airline a day or two before your departure. The rules and regulations are constantly changing, and that is why reconfirming is necessary. Also, just because you call so far in advance still doesn’t guarantee your golden retriever will be on the same flight as you.

Try to plan your departure for a nonstop flight during the week that is also not on a holiday. This is the best condition for your golden retriever to fly in. However, the weather also plays a major part in this.

Some airlines won’t even accept a dog on the flight if the weather is too hot.

This is why it is also recommended to fly in the early morning or late at night during the summer. When the sun is not present.

During excessively cold weather, an Acclimation Certificate may be accepted.

This is only considered a safe option if your dog is acclimated to colder weather conditions already.

A Trip to the Vet May Be a Prerequisite

When you call to set up the reservation for your golden retriever you may be notified that you will need to turn in an Airline Veterinary Health Certificate. Most airlines require you to turn this in no more than seven to ten days before departure.

The International Airline Transportation Association (IATA) also states that if your golden retriever if traveling internationally, he/she will need to be microchipped. The microchip but be a 15 digit non-encrypted microchip that operates at 134.2kHz.

As far as vaccinations go, your golden retriever will need an up-to-date rabies vaccine. If you have a puppy and this is the first rabies shot it has had, then you will have to wait for 28 for the vaccine to take effect before flying.

The Physical and Mental Condition of the Golden Retriever Matters

You could jump through all the hoops required to get your golden retriever safely on the flight, but the airline can still refuse to let your dog fly.

If your dog is considered too old to fly, this could keep him/her from getting on the flight. The airline may also refuse if you have a puppy that is not fully weaned or too young even for vaccines.

Upon the time of departure, if your golden retriever has come up sick, this is also a reason for declining flight.

Some of the more common reasons are misbehavior. You must make sure to properly acclimate your golden retriever to his/her cage well before departure.

Especially if you have a naturally anxious dog. If your golden retriever poses a physical threat to himself or anyone else, your dog will not be allowed to fly.