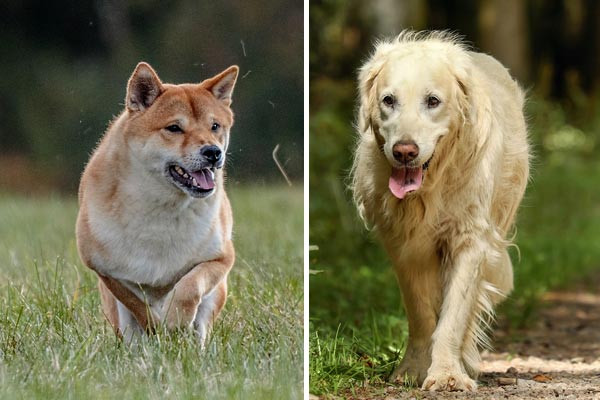 Hybrid dog breeding is a well-known technique for creating new purebred dog breed lines. However, in the earliest stages of a hybrid breeding program, it can be hard to predict how a puppy will look and act when they grow up!

In this particular case, the Shiba Inu is one of the world’s most ancient dog breeds while the Golden Retriever is a relatively recent breed line. As well, Shiba Inu dogs are quite petite and neat while Golden Retrievers are large and hairy.

What can you expect when you choose a Shiba Inu Golden Retriever mix dog? Read on to find out!

Because there are significant size and temperament differences, you need to be prepared for a puppy that grows up to be quite different than what you might expect.

In this short YouTube video, you can watch a gorgeous Shiba Inu and Golden Retriever having fun romping and playing together.

It is easy to visualize how beautiful any puppies would be from crossing these two golden-coated dog breeds!

Designer or hybrid dog breeding doesn’t sit well with everyone. But as Breeding Business explains, there is a lot of science that goes into these breeding programs behind the scenes.

Dog breeders need to be very familiar with the extended breed line history of each purebred parent dog. This gives them more data to work with when trying to create a new potential purebred dog breed.

Hybrid dog breeding can bring together complementary and desirable traits, such as strong guard dog instincts with a loyal and loving temperament towards people, producing a dog that makes an ideal family companion.

But early outcrossing, or hybrid breeding pairs will result in a truly mixed bag of puppies.

Another puppy in that very same litter might look exactly like a Golden Retriever on the outside but have the Shiba Inu personality.

The other puppies may fall somewhere along the spectrum in both traits and there is really no way for the breeder to predict in advance where the genes will fall for each puppy.

These very early litters are called F1 litters, or first-generation litters because both parent dogs are purebred dogs from different breed lines.

Starting with the next generation, called the F1b or first-generation backcross generation, at least one of the parent dogs is a Shiba Inu Golden Retriever mix dog. This brings slightly more genetic uniformity into the litter.

The next generation is F2 or second generation, and the generation after that is F2b or second-generation backcross. And the breeding program continues to produce more uniform traits with each successive generation of puppies.

Finally, after several generations of puppies have been bred, the puppies start to look and act a lot alike. This is when the new hybrid dog breed starts to become eligible to apply for recognition as a new purebred dog breed in its own right.

This is very good to know if you need or want a puppy that is a certain size, has a certain temperament or coat type or has training needs! Picking a later-generation hybrid puppy will make it easier to predict what it will be like to live with your new puppy.

A Brief History of Dog Breeds

As Live Science explains, all dogs are related genetically to ancient wild wolves.

But most of today’s modern dog breeds sure don’t look like it!

And in fact, no one knows for sure exactly how many dog breeds are in existence today.

But that does not describe the venerable Shiba Inu.

The Shiba Inu’s genetic lineage stretches all the way back to 300 B.C. The breed name means “brushwood dog” according to the American Kennel Club (AKC).

These small, compact, neat, and quick dogs were used as hunting dogs in the mountainous regions of ancient Japan. They were relatively unknown outside of Japan until the mid-20th century when a military family brought a Shiba Inu to the United States.

So any dog breed that includes the Shiba Inu is literally representing the earliest origins of domestic dogs in Asia.

With the Golden Retriever’s iconic status and worldwide popularity, you might think these dogs are an ancient breed as well. But they are really quite recent.

As the American Kennel Club (AKC) points out, the Golden Retriever as a recognized breed did not exist prior to the 1850s, or at least not in any formal way.

Everything about the Golden Retriever breed, from that signature wavy golden coat to the affable personality and resilience being out in the elements, has arisen through deliberate cross-breeding by dog breeders.

How to Research Your Shiba Inu Golden Retriever Mix Puppy

As we mentioned in a previous section here, what you can expect at first is quite a lot of surprises.

But as breeding becomes more streamlined and parent dog pairs are true Shiba Inu Golden Retriever hybrids rather than purebred dogs from two separate breed lines, these surprises will lessen.

Here, it is important to take a big picture look at important variables to decide what traits you want and need in your mixed puppy.

These are the major dog breed traits you will want to research thoroughly:

You should also consider whether your existing home space and yard (or lack thereof) will be suitable to accommodate your new puppy’s needs.

This is especially true if you live in a multi-unit or shared housing space that imposes any size or weight restrictions on pets!

So let’s take a look now at each of these important traits and what your Shiba Inu Golden Retriever will need from you to live life to the fullest.

Aside from the similarities in the Shiba Inu and Golden Retriever coat coloration, very little about the overall appearance of these two purebred dog breeds is alike.

The Shiba Inu weighs 17 to 25 pounds and stands 13.5 to 16.5 inches tall from bottom of paws to top of shoulders. Females weigh about seven pounds less than males and are shorter by about two inches.

Golden Retrievers, on the other hand, typically weigh 55 to 75 pounds and can stand anywhere from 21.5 to 24 inches tall. Females typically weigh about 10 pounds less and stand two inches shorter than adult males.

So how can you possibly predict the adult size, height, weight, and overall appearance of your Shiba Inu Golden Retriever dog with such a wide range of possible outcomes?

The best way is to get as much information as you can about the size, height, weight, and appearance of each parent dog. This can narrow down the range to better predict how large your puppy might grow up to be.

One of the biggest differences between the Shiba Inu and the Golden Retriever dog breeds in terms of personality and temperament is protective instincts.

The Shiba Inu has a highly developed protective and guarding instinct. The Golden Retriever often seems to be missing this trait altogether.

Where the two different dog breeds are more in alignment is in how they relate to their people. Both the Shiba Inu and the Golden Retriever are reliably loyal and loving towards their human families.

However, the Shiba Inu is not as good with young children as the Golden Retriever, which is something to keep in mind if your kids are still very little.

Another area where the Shiba Inu and Golden Retriever are not much alike is with their coat type.

The Shiba Inu has a short, neat, flat coat while the Golden Retriever has a long, wavy, thick coat.

Shiba Inu dogs shed moderately while Golden Retrievers shed profusely. Both dogs have a double-layer coat, which means both will shed seasonally as the undercoat falls out.

The Shiba Inu’s coat is fairly washed and wear and needs only occasional brushing. The Golden Retriever may need daily brushing to remove tangles and burrs and keep shed hair under control.

One surprising area where the Shiba Inu and Golden Retriever parent dogs are remarkably alike is in terms of overall energy level. Both are described as having a medium energy level once they reach adulthood.

However, both breeds can develop noticeable problem behaviors if they don’t have enough activity and enrichment for the body and brain.

Vetstreet points out that Shiba Inu dogs tend to be very vocal and will “yodel” instead of bark to get their way. They are an independent dog breed developed to work at a distance from people and think on their feet, which can make training a challenge.

Vetstreet describes Golden Retrievers as having just the opposite problem with training and exercise. These dogs are eager to please to a fault and crave the companionship of people above all else.

Golden Retriever puppies in particular can also be difficult to control as they get stronger and bigger before they get calmer.

Finally, with the number of purebred dogs’ health issues today, you simply cannot neglect to do your health research before choosing your new puppy.

Be sure the breeder you work with has done all required and optional genetic pre-screening tests on the Shiba Inu and Golden Retriever parent dogs and can show you the clear test results.

This is the only way to prevent bringing home a puppy with a severe, expensive, and potentially life-limiting genetic health issue that could have been prevented.

Overall, Shiba Inu dogs live 13 to 16 years while Golden Retrievers live 10 to 12 years. In this case, you may get lucky and bring home a puppy that benefits from the longevity of the Shiba Inu dog breed.

With these traits foremost in mind, you can select a reputable, responsible hybrid dog breeder who breeds healthy, strong, friendly Shiba Inu Golden Retriever puppies. This type of breeder can help you select the right puppy for your home, family, and lifestyle.