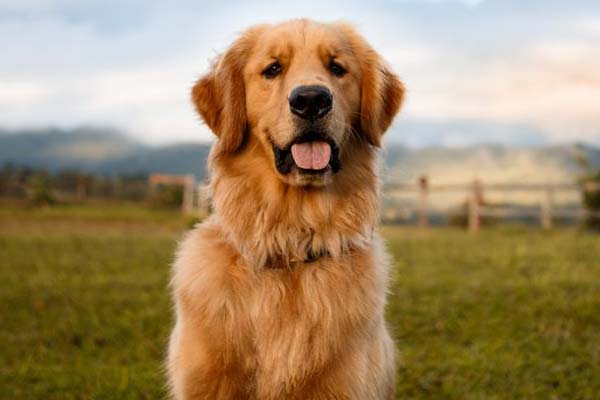 These beautiful animals were originally bred as gun dogs to fetch waterfowl during hunting and shooting parties.

Like all domesticated dogs, golden retrievers can develop diseases as they age, and the golden retriever is no exception forming an eye disease called pigmentary uveitis.

This article will focus on golden retriever pigmentary uveitis, it’s symptoms, how it changes the lives of the pets who have it, and ways to treat this disease.

Uveitis is a clinical name for inflammation that of the eye affects the iris and other components of the eye. The iris is the brown part of the eye in most golden retrievers.

The structure behind the iris that produces fluid for the eye is the choroid, and it is this part of the eye that GRPU affects.

Iris cysts, small fluid-filled sacks of fluid, form and is attached to the iris or free-floating inside the eye. Gradually, the symptoms grow worse and lead to the formation of glaucoma and eventually, blindness.

Unfortunately, when golden retriever pigmentary uveitis was first diagnosed, it was believed the animals were in no discomfort other than losing their eyesight.

This belief turned out to be untrue as the dogs who contract this genetic disorder have migraine headaches that must be extraordinarily painful from glaucoma.

There is no universally effective treatment regimen that has been established for GRPU leaving veterinary ophthalmologists struggling to treat using the latest research and experience to treat affected animals.

However, there are some standards, and they depend on the stage of the disease:

In this stage of golden retriever pigmentation uveitis, the disease is normally caught either by alert dog owners or by a yearly exam by a veterinarian. The eye appears red and runny with the iris seemingly darker.

Medication for this stage is usually a lifetime prescription of topical steroid and nonsteroidal anti-inflammatory prednisolone acetate and check-ups every six months to an ophthalmologist. At each new visit, the pressure in the eyes is measured to check the progression of the disease.

In the middle stage, treatment is the same as the early stage, except some dogs might need anti-inflammatory medications with possibly an oral steroid.

In the late stage of GRPU, glaucoma has worsened so the animal will need topical glaucoma medications to help get the pressure inside the eye down. If the animal’s disease wasn’t caught early enough, the dog will go blind in both eyes.

Once a dog has become blind, the next procedure is to remove the eyes because the dog is in constant pain, and it is the most humane treatment.

Allowing the animal to receive pharmacologic ablation, as humans often do, will only add higher pressure in the eyes and would create even more pain for the dog.

Early detection is the key to keeping a golden retriever from enduring years of horrific pain and final blindness.

There are currently two things a dog owner can do to prevent their golden retriever from suffering:

While a DNA test is now available, the disease does not show itself before age two, getting the dog’s eyes examined after that year is vital to prevent unnecessary suffering.

Early intervention can greatly increase the animal’s chances of not having the disease advance as treatment with anti-inflammatory drugs are highly effective when given early enough.

Owners of golden retrievers need to stay alert for any signs the eyes of their dogs are ailing. Watch for red/pink conjunctivitis and changes to the coloration of the iris.

In knowing what to watch for, and learning about the latest research, a dog owner need not worry about their animal going reaching the final stage of the disease.

It wasn’t until the early 1990s that veterinary ophthalmologists in the Northeastern United States began noticing a new eye disease that occurred only in golden retrievers.

Typically, the animals were eight to nine years old. However, dogs as young as two and as old as thirteen years received the diagnosis of GRPU.

Over the next twenty years, golden retriever pigmentary uveitis became an epidemic and is the leading cause of blindness in the United States to these magnificent animals.

In 2000, an article was published in the Journal of the American Veterinary Medical Association that was groundbreaking in understanding better the cause of GRPU. (Research Link)

The research found that, although the exact mode of inheritance was unknown, the disease was most likely genetic in nature from a common ancestor in the Northern US. Later, Dr. Wendy Townsend, a veterinary ophthalmologist, performed further research and founded a DNA test to identify golden retriever pigmentary uveitis.

Research into the causes and treatments for GRPU is ongoing with Dr. Wendy Townsend spearheading the effort to identify the disease’s genetic marker. In her efforts she requests two things from dog owners and Veterinarians alike:

The collected samples and tissues may be sent to Dr. Townsend for testing and evaluation in finding a possible cure for golden retriever pigmentary uveitis in the future. (Link to Dr. Townsend)

Golden retriever pigmentary uveitis is a genetically based disorder that affects mainly dogs of this breed. Left untreated, GRPU leaves animals in severe pain from a form of glaucoma.

Glaucoma these animals contract is highly painful, leading to blindness. After the golden retriever has lost its sight in both eyes, some dog owners choose to have the dog’s eyes removed to prevent further pain.

Although golden retrievers are prone to this genetic disorder, as pets they are superb, and the disease should not deter one from obtaining one for a pet.

Research goes on in the search for the answer as to what happens to the genes of affected dogs who contract golden retriever pigmentary uveitis, and the future seems bright.